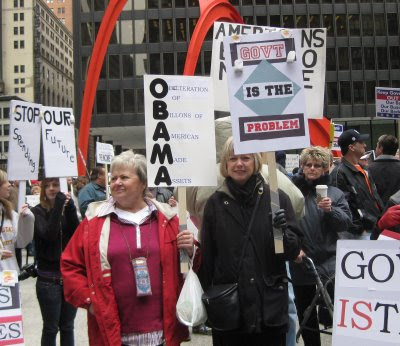 Freedom's defenders in the new culture war. Arthur Brooks, the sociologist who was surprised that it was conservatives who really cared--the most generous (and the happiest), looks at the Tea Parties (whom our President Barack Obama has dissed):

Still, the tea parties are not based on the cold wonkery of budget data. They are based on an "ethical populism." The protesters are homeowners who didn't walk away from their mortgages, small business owners who don't want corporate welfare and bankers who kept their heads during the frenzy and don't need bailouts. They were the people who were doing the important things right -- and who are now watching elected politicians reward those who did the important things wrong.

Voices in the media, academia, and the government will dismiss this ethical populism as a fringe movement -- maybe even dangerous extremism. In truth, free markets, limited government, and entrepreneurship are still a majoritarian taste. In March 2009, the Pew Research Center asked people if we are better off "in a free market economy even though there may be severe ups and downs from time to time." Fully 70% agreed, versus 20% who disagreed.

Life, liberty and the pursuit of happiness are under assault by Democrats and the Left--who now control all the levers of power in Washington, and are pushing to grab power in every corner of the economy. (Fanny Med?!!!)

This country was built on freedom and choice. People risked their lives and chose to come here for freedom. It is up to us all to ensure that America's freedom and way of live endure for our children and theirs.

P.S. Caroline Baum, Bloomberg, on what Milton Friedman would say. Capitalism Still Has Legs That Are Long and Sexy. The Chicago School is still alive and kicking! We had a TaxDay TeaParty here too.

Plus 53% in liberal NY Times/CBS poll say Obama won't get us out of recession until 2012. Time to push your pols to roll back this debt and tax and spend Obamanomics and adopt sound fiscal policies. We need jobs--private sector jobs, not big government that doesn't work.
P.P.S. The scene outside the President's town hall yesterday around St. Louis. Gateway Pundit. Reason on the left's stages of denial about the Tea Parties. And the Instapundit.