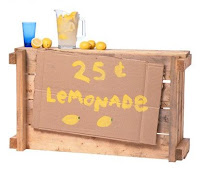 Arthur Brooks, the former liberal prof who discovered to his surprise that conservatives were more generous and happier to boot, lays out the new terrain of the culture war--and this one goes to the core of what makes America the unique nation it is:

The new statism in America, made possible by years of drift and accelerated by the panic over the economic crisis, threatens to make us permanently poorer. But that is not the greatest danger. The real risk is that in the new culture war, we will forsake the third unalienable right set out in our Declaration of Independence: the pursuit of happiness.

A timely message, a recurrent one, and this year most critical.

Make America safe for lemonade stands everywhere again! From Hawaii to PA, Kentucky to Missouri and beyond, let freedom ring. Quench your thirst for freedom, folks.