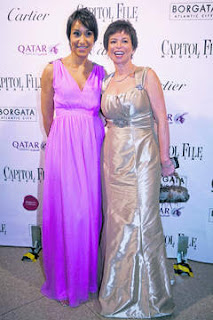 Valerie Jarrett's daughter's getting married, but Desiree Rogers (on the left), who watched her grow up, is not invited. Desiree's ex is, as well as Michelle and Barack:

It was Jarrett who gave the blessing to hire Rogers, an elegant fashionista with a business administration degree from Harvard, for the White House job after Obama reportedly was impressed with her social fund-raising skills.

But when Rogers began capturing more press attention than the first lady; garnering praise for being glamorous; and being panned for a security lapse leading to uninvited guests crashing the president’s first state dinner, things changed.

No word on the wedding entertainment.

Rahmbo and Bill Daley did not make the cut, no surprise there. This really does illustrate the split between the old Clinton faction and the O team. If you haven't read The Amateur, you might want to. I'm convinced, especially since Bill Clinton's recent "artless" pronouncements about Romney's sterling record and Obama, that lots of old Dems talked out of school in that book and are just sitting on their hands this time round.

Barack's getting some use out of his house, and has some guests, including his usual best buddy, the somehow always in the news Eric Whitaker.

While Valerie returns to the scene of the crime.  Well, as close as she wants to get to her failed project at Grove Park that just got bailed out.

And we may hear more from her in the months to come, according to the Axe -- Valerie Jarrett, survivor-- as she tries to convince us that the O team has our best interests at heart, and we should just trust this president.

Will the Rev. Wright be the skunk at the picnic?

Will Desiree try to gate-crash.

The charmed circle keeps getting smaller and smaller.