Come on, it's the LaRouchies 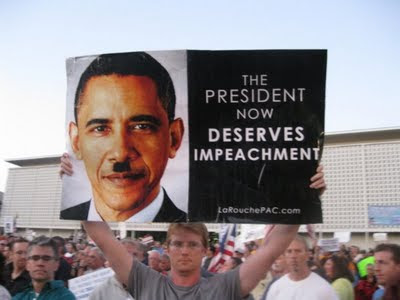 Or plants. This has been around for some time. It's not us. Note the LaRouchePAC on the sign in this pix. The president, and AP should know better. And President Obama, you should know, as they've infiltrated the Dem party in Illinois in the past:


LaRouche-affiliated political parties have nominated many hundreds of candidates for national and regional offices in the U.S., Canada, Sweden, Denmark, Germany, Australia and France, for almost thirty years. In countries outside the U.S., the LaRouche movement maintains its own minor parties, and they have had no significant electoral success to date. In the U.S., however, they are active in the Democratic Party, and individuals associated with the movement have successfully sought party office in some elections, particularly Democratic County Central Committee posts. [snip]

In 1986, Janice Hart won the Democratic Primary election for the office of Illinois Secretary of State, and Mark J. Fairchild won the Democratic Primary for Illinois Lieutenant Governor. Up until the day following the election, major media outlets were reporting that George Sangmeister, Fairchild's primary opponent, was running unopposed. 21 years later Fairchild asked, “how is it possible that the major media, with all of their access to information, could possibly be mistaken in that way?”[10] Democratic gubernatorial candidate Adlai Stevenson III was favored to win this election, having lost the previous election by a narrow margin amid allegations of vote fraud. However, he refused to run on the same slate with Hart and Fairchild. Instead, Stevenson formed the Solidarity Party and ran with Jane Spirgel as the Secretary of State nominee. Hart and Spirgel's opponent, Republican incumbent Jim Edgar, won the election by the largest margin in any state-wide election in Illinois history, with 1.574 million votes.[11]

After the Illinois primary Senator Daniel Patrick Moynihan (D-NY) blasted his own party for pursuing a policy of ignoring the "infiltration by the neo-Nazi elements of Lyndon H. LaRouche," and worried that too often, especially in the media, "the LaRouchites" are "dismissed as kooks." "In an age of ideology, in an age of totalitarianism, it will not suffice for a political party to be indifferent to and ignorant about such a movement," said Moynihan.[12]

Do anti-tax tea-partiers really want to build "magnetically-levitated" trains across the oceans? Puhleeeze:

In November 2007, Mark Fairchild returned to Illinois to promote legislation authored by LaRouche, called the Homeowners and Bank Protection Act of 2007, that would establish a moratorium on home foreclosures and establish a new federal agency to oversee all federal and state banks. He also promoted LaRouche's plan to build a high-speed railroad to connect Russia and the United States, including a tunnel under the Bering Strait.[10][25]

In 2009, the LaRouche movement printed pamphlets showing President Barack Obama and Hitler laughing together, and posters of Obama wearing a Hitler-style mustache.[26] In Seattle, police have been called twice in response to people threatening to tear the posters apart, or to assault the LaRouche supporters holding them.[27]

They hand this kind of stuff out around downtown Chicago. Or maybe our President Barack Obama and his tame media should just consult Wikipedia.
Posted by Anne at 9/27/2009 04:28:00 PM