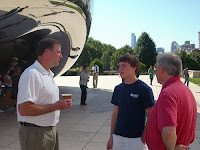 New website, new ads. On offense. From Brady for Illinois:

Chicago – Brady for Illinois today announced it raised $3.6 million in campaign contributions through the first half of this year.

In a report to be filed by July 20 with the State Board of Elections for the reporting period January 1st to June 30th, the Brady campaign will report contributions from every one of the state’s 102 counties. The campaign received contributions from over 4,200 individual donors, 2,500 of which were donations under $100.

Through June 30th, the campaign had approximately $2.3 million on hand.

The campaign also today announced the addition of businessman and long time Republican Party leader Ron Gidwitz as Chairman of Brady for Illinois.

“Bill Brady is the right candidate for Illinois, and I'm proud to support him,” Gidwitz said. “Bill understands we must stop runaway spending and tax hikes, and start bringing real jobs back to Illinois.”

”I’m excited about leading a strong team to help Bill win in November, and to put Illinois back on track starting Day One,“ Gidwitz said.

Mr. Gidwitz is active in the Chicago business and arts communities. He was named Crain’s Chicago Business Executive of the Year in 1988. He has served as Chairman of the Illinois State Board of Education. He is a member of the Board of Trustees/Directors for the Field Museum, Rush University Medical Center, the Museum of Science and Industry, and Lyric Opera of Chicago. He also serves as Governor of the Boys and Girls Clubs of America.