From Russia with Love 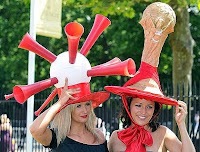 At least some citizens here are clued in:

One of the Murphys' neighbors, who asked not to be named, also noticed "unusual" traits. "He clearly was Russian with a name of Murphy—I thought it was weird," said the neighbor, who lived near their home in Montclair, N.J., which records show the Murphys purchased in August 2008 for $481,000.

When news broke of their arrest, this person said, "I just wasn't that surprised."

Perhaps the Russian team is masquerading as Argentina.

P.P.S. Sadly, we can eliminate the French.