Schock on those stimulus signs 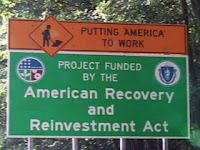 You know the miserable failure of a stimulus.

The signs are making people mad. Top vote getter so far on YouCut this week.

Another failure of the Obama administration.

Q: Have you heard about McDonald’s’ new Obama Value Meal?
A: Order anything you like and the guy behind you has to pay for it.

Q: What does Barack Obama call lunch with a convicted felon?
A: A fund raiser.