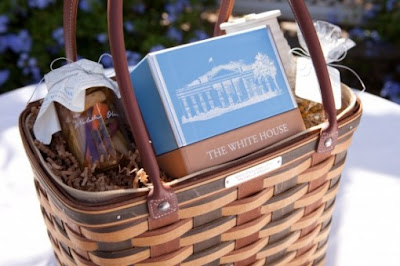 Well, I have to say, for once Michelle Antoinette did a good deed, I agree with the boys at Hillbuzz--gifting UN honchos with veggies in New York. (No mention of the UN menu in Rome this year.)

They should be thankful they didn't get a speech.

But did she grow it herself? I agree with Hillbuzz about that garden. It looked to be about the size of mine and I don't get that kind of yield (aside from my limited veggie garden abilities, I'm more a flower person).

On the menu today for the international ladies--a picturesque let them eat cake locavore "farm". NPR tiptoes around:

On Friday, Obama hosted a few dozen other first ladies for a break from the United Nations General Assembly meeting. They traveled to a nonprofit farm and educational center outside of Manhattan that also happens to house a world-class restaurant.

A flock of turkeys greeted the motorcade at the Stone Barns Center for Food and Agriculture, where the leaves were starting to turn and the fields giving up the last of their summer vegetables.

The women had been told to dress for a farm, but there were at least a few Chanel suits and five-inch heels. The tour started at an outdoor chicken coop, where Sarah Hannah was teaching third-graders from a local school how to gather eggs without getting scratched.

The entourage went on to the tomato fields, the greenhouses and the herb garden — where Mrs. Obama declared, "This is the best-smelling part of the whole farm!"

Wanna bet there was no pickled okra on the menu. The First Lady felt the need to instruct UN spouses from around the world to get in touch with their food. ( I mean, after all, not everyone has a personal chef to bond with.) NY Times breathless:

The first lady’s foreign guests had been advised to wear “farm-appropriate clothing.” Mrs. Obama, wearing a floral and foliage-patterned Tracy Feith dress that she also had worn to her first public event after President Obama’s inauguration, had on silver ballet flats. But not everyone complied: not the women in their five-inch heels, nor the ones in their special-occasion native costumes with elaborate headdresses.

Earlier, when Mrs. Obama had dropped by the kitchen to see one of the children’s cooking classes, pesto and cavatelli were being prepared from scratch. But as the little sous-chefs were about to begin cutting the pasta dough, the Secret Service arrived and told them they had to put away all the knives. The cavatelli preparation had to wait until Mrs. Obama left.

And apparently only heirloom tomatoes count. I prefer Big Boy or Better Boy myself, but maybe it's not to Mrs. Obama's taste. NPR with a final note:

In New York on Thursday, President Obama acknowledged that his wife wins the popularity contests in this administration.

"I feel grateful that Michelle — so far, at least — has not run for any offices I've been running for," he said. "She would beat me thoroughly."

And I suggest the UN delegates auction off the pickled okra at Sotheby's.

P.S. But will she be welcome in Iowa? Not expanding the tour there apparently. How about in Illinois?

P.P.S. omg. (How did the NY Times miss this. Perhaps this is what they meant by "special-occasion native costumes with elaborate headdresses") Althouse: Which First Lady is taller?

Mrs Biya was joined by spouses from Mongolia, Swaziland and Latvia, as she toured the premises.

Meanwhile, her husband Paul is being sued by a Cameroon opposition leader for failing to set up elections to replace dead members of parliament.