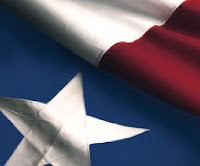 But consider this about the relatively few net new jobs the economy has created under Obama. As my National Review colleague Rich Lowry recently noted, half of all the net new jobs created in the United States (from August 2009 to August 2010) were created in Texas. According to White House logic, Obama must simply love Texas, since he’s the one creating all of those jobs.

Here is Rick Perry's first ad, which makes your point.

It doesn't hurt that he is a handsome dude, and around here, we like that he's a good shot.

Bill White by comparison looks like a garden gnome.

I must admit that I haven't even looked at Bill White, because this year is too important, especially with redistricting, to go flirting with splitting my ticket. But the last two years have convinced me that Democrats aren't like Sam Nunn of Georgia any more, so I don't want to vote for any of them. It just encourages them!

If it ain't broke, don't fix it! Perry can't be that bad, if we're making more jobs than all the other states combined.

Great to hear from you.

You are right about the Dems.

I think Texas is wonderful:)