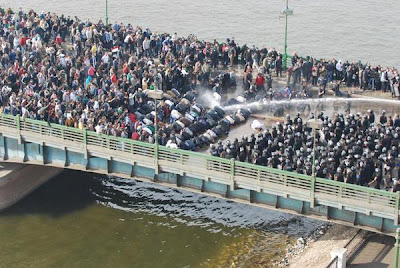 Who can forget Egyptian bloggers imprisoned there. Copts who have been killed in their churches, but are now offering to shield Muslim worshippers from the police.
Then there is the Egypt that made peace with its neighbor, Israel.
Pray.

From the EA News Feed link above:

2000 GMT: A very touching story is developing in Cairo. As the NDP's headquarters burn, there were fears that the Egyptian National Museum, which houses some of the world's most ancient artifacts from the old Egyptian civilization and a beautiful collection of ancient whales fossils, would catch on fire too. There were earlier reports - albeit unconfirmed - that some people were looting the museum.

Now Al Jazeera is reporting that young protesters have formed a human chain around the museum to protect it against looting. It seems for now that this treasure trove of human ingenuity and the natural world's wonders is in no immediate danger.

More. What to worry about:

Meanwhile, back at WTF:

I would suggest praying that Mohammed Elbaradei is not the next in line for Egypt's presidency. Elbaradei is a proven ally of Iran and anti-Israel. Putting him in charge of a military 2x larger than Israel's and equipped with American weaponry would be difficult for both the US and Israel.

Hopefully Mubarak will endure, because the alternative is pretty bad.

Yes. I just hope there is another leader that will emerge and transition, that we could support.

They have elections coming up but after the disaster of the Hamas election win in Gaza, lots of wariness.