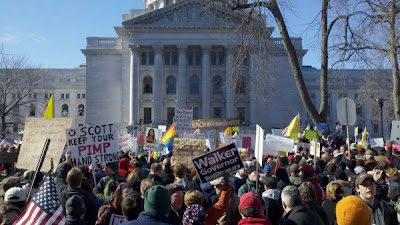 Here.
Pix via the Instapundit.

Interesting the streams are coming from independent Minnesota outlets. Probably no coincidence as they just had Republican Gov. Pawlenty there (tho sadly didn't elect a TEA Partier, but won both houses of the legislature)

...Andrew Breitbart speaking now, 2:13 central. "It's an electronic civil war". The media with all their cameras ready to demonize could only find the TEA party picking up after themselves. We won all these elections. "The adults are back in charge".

...Talking about union thugs beating up Kenneth Gladney. "Where was the MSM?" "We don't need them any more". "We are the modern day peace movement". "Those are the anarchists over there burning down the Governor's mansion."

Joe the Plumber on next:)

"This is an existential battle. It is the battle of our times...The MSM took their side" @AndrewBreitbat @istandwithwalker #WI