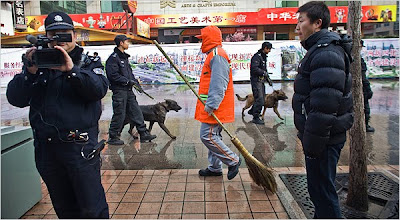 Foreign reporters hit hard.
I'm being a bit sarcastic because the worst that can happen to them is getting roughed up or deported. And it is a communist country, a fact not often mentioned by the same foreign reporters. Shouldn't it be a worker's paradise? Nonetheless. NY Times:

This week, public security officials warned reporters from The New York Times, The Associated Press, Agence France-Presse and numerous other foreign news organizations that they had violated regulations by appearing at possible protest sites and that further infractions would not be tolerated.

At Thursday’s regular news conference at the Foreign Ministry, Jiang Yu, a spokeswoman, suggested that some reporters were trying to stir up unrest, not report on it. “Law-abiding people will be protected by the law,” she said. “But people who are trying to create trouble in China, I can tell them that they have made the wrong plans.”

“Some people are eager to join the fray,” she continued. “For people with that kind of motive, no law can protect them.”

So much for the rule of law.

China also continues to ramp up its military spending and menace its neighbors:

The resumption of rapid growth follows a year in which China’s neighbors have expressed concern about the military’s increasingly muscular behavior in waters off its Pacific coast and along the tense border with India. But the spokesman, Li Zhaoxing, repeated China’s longstanding position that the military is a defensive force and “will not pose a threat to any country.”