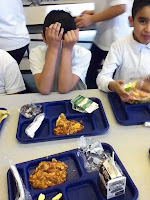 This is ridiculous. As a parent at another school pointed out:

For many CPS parents, the idea of forbidding home-packed lunches would be unthinkable. If their children do not qualify for free or reduced-price meals, such a policy would require them to pay $2.25 a day for food they don't necessarily like.

"We don't spend anywhere close to that on my son's daily intake of a sandwich (lovingly cut into the shape of a Star Wars ship), Goldfish crackers and milk," education policy professor Diane Whitmore Schanzenbach wrote in an email. Her son attends Nettelhorst Elementary School in Lakeview. "Not only would mandatory school lunches worsen the dietary quality of most kids' lunches at Nettelhorst, but it would also cost more out of pocket to most parents! There is no chance the parents would stand for that."

Ah, but what else is going on:

Any school that bans homemade lunches also puts more money in the pockets of the district's food provider, Chartwells-Thompson. The federal government pays the district for each free or reduced-price lunch taken, and the caterer receives a set fee from the district per lunch..

It's politics.
P.S. Sun Times on another union abuse:

Chicago schools did away with recess in the late 1970s, as most public schools adopted a “closed campus” policy after the Chicago Teachers Union won that option in its 1973 contract.

Schools eliminated a 10-minute morning recess, a 10-minute afternoon recess and a lengthy student lunch period. Lunch for teachers then was pushed to the end of the day, allowing them to leave early if they wanted.