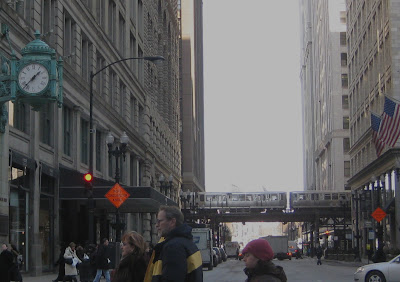 Ain't it the truth.


Kotkin grasps the most important facts about urban development today: without rapid, small business led growth, there is no way that the residents of our inner cities can escape the cycle of poverty that has them in its grip.  And progressive blue politics as conventionally understood systematically squeeze and crush growth in our cities.  The bluer a city, the bluer a state, the fewer private sector jobs it tends to create.

Poetry among the ruins. In order for Chicago to pay these luxe public union contracts, taxes would have to double--for those who still pay them.

Talk is of a shutdown this winter.

The city is already shutting down. Isn't it Dems.

...From the exchange floor in Chicago the other day: Santelli Says It ALL*Jobs Numbers CRASH

backyardconserv Anne Leary
The best:) & applause?!:Coulter Tells MSNBC Contributor His Government Worker Mom 'Is A Drain On Society': bit.ly/nieLxX via @AddThis
10 seconds ago