Another O fundraiser linked to Solyndra 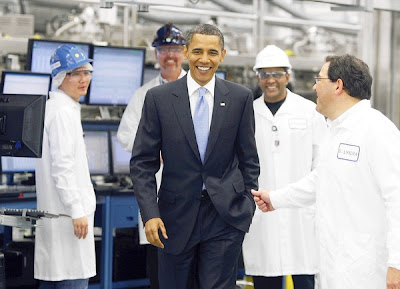 The Solyndra scandal expands. Chicago Tribune/LA Times (for once the combo works on this Chicago Way--California connection):


The White House faced mounting political complications as a second top fundraiser for President Obama was linked to a federal loan guarantee program that backed a now-bankrupt Silicon Valley solar energy company, and as two California lawmakers called for investigations of a state tax break granted to the firm.

Steve Spinner, who helped monitor the Energy Department's issuance of $25 billion in government loan guarantees to renewable energy projects, was one of Obama's top fundraisers in 2008 and is raising money for the president's 2012 reelection campaign.

Oh yes, rev up that GENIUS Obamanomics once again:


Last week, he invited Obama fundraisers who were in Chicago for a national finance committee meeting to the launch of the Technology for Obama fundraising program. In July, the Obama campaign credited Spinner with raising between $200,000 and $500,000 so far this year.

Just to clarify, LA Times, Solyndra was denied under the Bush administration:

Solyndra had first tried to get Energy Act funding during the Bush administration, but had been rebuffed shortly before President Bush left office. Small wonder: Solyndra, as former hedge-fund manager Bruce Krasting concluded, was “an absolute complete disaster.” Its operating expenses, including supply costs, nearly doubled its revenue in 2009 — and that’s without factoring in capital expenditures and other costs in what, Krasting observes, is a “low margin” industry. The chance that Solyndra would ever become profitable was essentially nonexistent, particularly given that solar-panel competitors backed by China produce energy at drastically lower prices. Yet, as Stiles reports, within six days of Obama’s taking office, an Energy Department official acknowledged that the Solyndra “approval process” was suddenly being considered anew.

Gee, what's going on? Andrew McCarthy thinks it's fraud--and our President Barack Obama was front and center. Of course, the White House can't say why OMB officials felt pressured to approve the initial half a billion loan guarantee--nor why DoE officials subordinated taxpayer interests on the loan to those of the Solyndra investors when the company was flailing last spring--right before Obama's big rosy speech.

As John Kass notes, it's not a Washington story.