Your O NO! & Faux History of the Day 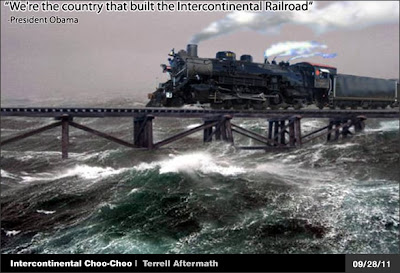 Doubling up as a symbol of Obama foreign policy--cuz who can fly safely any more. And put Hillary! (you don't rate even that anymore Joe) on that slow train to China too
***
In case you missed it, more faux history from the Left. Can we drive a transcontinental stake through the heart of this spurious raaaacist charge against Republicans? Morning Jay:

I think this comment speaks to a broader issue: the tendency of liberal Democrats to misrepresent the origins and nature of Southern Republicanism.
I offer three points to counter the crude charge that “GOP racism equals Southern votes:"
1. Southern Republicanism had little to do with Southern segregation.
The systematic repression of the constitutional rights of black citizens in the South was not due to mere racial enmity. Instead, it had as its origins the need of the elite doctor-lawyer-planter-merchant class that resided in the majority black counties of the deep South to retain its privileged position. If African Americans enjoyed the right to vote, this class would lose its power.
These elites had nothing to do with the Republican party. Indeed, they actively resisted the entreaties of Republican Rutherford Hayes, who thought that, as former Whigs, they might unite with the GOP on economic issues. But that never happened. In fact, these hard-core segregationists were so staunchly committed to the Democratic party that they backed Al Smith (an anti-prohibition Catholic) over Herbert Hoover in 1928.
Until roughly the 1980s, Southern Republicans were generally of two types. The first was the mountain Republicans of Eastern Tennessee, and Western Virginia and North Carolina, who were the descendants of former Whigs and Constitutional Unionists, and who had opposed secession. These mountain Republicans were not the friends of the elites, as they opposed the Crump machine in Tennessee and aligned with the populists in North Carolina and Virginia.
The second type of Southern Republican was not really found until after World War II, with the rise of the “New South” economy based on energy, shipping, defense, tourism, high-tech, and agribusiness. These sorts of people settled in cities like Charlotte, Dallas, Houston, Miami, and Tampa, and were often Northern transplants. They were conservative on economic and cultural issues, and they were actually an implicit threat to the segregationist regime; after all, bank managers in Tampa or insurance executives in Houston had no economic reason to keep blacks and poor whites in the deep South suppressed. We can see the power of these voters as early as 1952, when Eisenhower won all five of those cities (and this despite the fact that the Democrats nominated for vice president Senator John Sparkman of Alabama, a staunch segregationist).