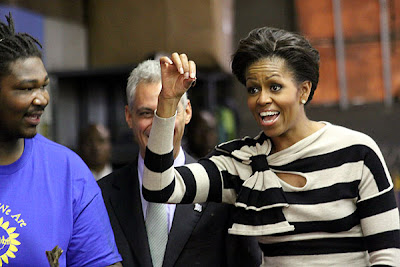 Too bad former Cook County Board President the Toddler Stroger wasn't down at the faux farm, he might have thought it was the food dessert. Chicago Mag and Puffpo contributor Carol Felsenthal:


So I applaud these issues, but they seem small-bore. Yes, she is being true to herself; she’s just not, in my opinion, pushing herself beyond her comfort zone.

But Ms. Felsenthal lives in hope for a second term, describing the FLOTUS not as the "enormous asset" preferred by the campaign, but as a priceless asset.

We've already seen her being true to herself, Carol.

P.S. JWF has another interpretation--and invitation...hmm, what's Rahm up to.

P.P.S. Some drop off in enthusiasm:

Obama’s visit coincided with the recent release of fundraising by the president’s campaign showing 11 new Illinois bundlers had been recruited since July, bringing to 28 the number of big-dollar fundraisers from the president’s home state for the re-election effort.

For the 2008 campaign, Obama benefitted from at least 84 Chicago area residents, business partners and couples who served as bundlers, raising $9.65 million for his first election. So far, this election the Chicago bundlers have pledged to raise at least $2.75 million for Obama.

Fourteen of this election cycle’s regional bundlers also played a similar role in 2008.

And while three Chicago area bundlers raised at least $500,000 for Obama in his initial run for the White House, none are listed on the campaign’s latest report.

"But Ms. Felsenthal lives in hope for a second term, describing the FLOTUS not as the "enormous asset"

I have heard FOTUS refered to as and Enormous Walrus A$$, but . . .my hearing could be off.

I think the subliminal stuff from these Dem flacks is hilarious

Indeed. Rather Freudian slip-shod, what?