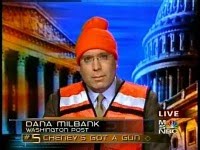 Really, Dana. Via RCP: The Hermanator is now the hunted.
(Oh, I see now they've taken it off their top picks. Gee I wonder why)

We could say it was perhaps too most dangerous game.

We could say it was because he doesn't parse his words. In Clintonian manner. We could say worse.

But I will say this.  This is not honorable, but we don't expect that from the press.

This is what we face as conservatives, every day. A witch hunt. I think Ann Coulter put it well.

Milbank may be laughably partisan, Cain may be not quite ready for this level of intensity on the trail, but make no mistake--this is a poisonous display of the elitist rot that has brought America to its knees.

More. Protein Wisdom: What did Politico know and when did they know it:


If the worry among the chattering classes is now focused on Herman Cain’s various awkward attempts to answer the questions the Politico story helped to raise — specifically, how the “evolution” of Cain’s answers in various interviews are affecting public perception and creating a cloud of suspicion over both his campaign and his character — it becomes important to know just how much of what has become the story was driven by the machinations of the Politico reporters themselves.
That is to say, if the reporters who worked on this story were aware in advance of publication that Herman Cain was constrained by a confidentiality agreement from answering the charges Politico was levying against him (and I’m quite sure they’ll respond by saying they were merely “reporting” earlier charges, not levying any charges against Mr Cain, but we all know better), should they not have disclosed this in the story itself — particularly if they were going to follow up the story’s publication by doing media appearances in which they explicitly told other members of the media to press Mr Cain for the specifics?
Or, to put it another way, how do the Politico reporters square their suggestion that Mr Cain be responsible for providing the specifics to a story they published, with their own knowledge of a confidentiality agreement that they knew would prevent Mr Cain from speaking.
Already, the new wrinkle to this story is that Cain may have violated the confidentiality agreement merely by attempting to answer questions from reporters demanding the specifics Politico reporters asserted it was incumbent upon Mr Cain to provide. In fact, Politico itself is now reporting, using one of the women’s attorneys as their proxy, that Cain broke his confidentiality agreement — even as the WaPo is complaining that Cain won’t answer questions.

I thought they tossed a net over that goof a year ago. Dana's got issues that make him an MSNBC standout!

Well it's the Wasington Post. They stick with their leftist losers. Because that's who they are.