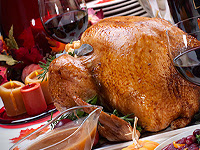 The cost of a Thanksgiving dinner is up 13%.

And millennials are moving in with the 'rents:


According to Census data, 5.9 million Americans between 25 and 34 years of age—nearly a quarter of whom have bachelor's degrees—live with their parents, a significant increase from 4.7 million before the recession.

But many parents can't afford the extra expense. A full 26% of those polled by the nonprofit group took on more debt to help their offspring, 13% delayed a planned life event such as a home purchase, and 7% postponed retirement.

Compounding the problem is the fact that certain parents are crowding the younger generation out of the job market because their support of their grown kids means they can't afford to retire.

It's potluck around the table. That pricey turkey economy.

P.S. Retirement wars. The growing "wealth gap" between old and young could get ugly as it dawns on the latter that they won't have anything to retire on. #OccupyReality  Some of their parents won't either.
...Time for a classic
Posted by Anne at 11/10/2011 06:26:00 PM