Into the Red Zone, Chicago May Day

Armed with my Starbucks, I wandered over to LaSalle St. to check out the big whoop occupy NATO eeevil banks or something. Cuz a "police state" is a terrible thing to waste. Cuz don't know much about history. Or of living and dying without freedom. 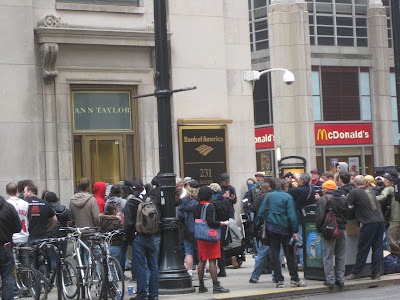 They were a pathetic few, clustered on the corner. 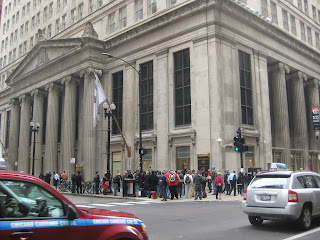 I crossed the street, and, though there were few signs, this kid had one. 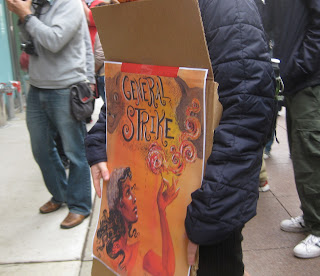 So I asked him if he was a high school or college student. He said he was a sophomore at Glenbrook South. (A tony suburban school) So, I said, why not in school today? Apparently his English teacher is giving him credit for a project documenting this. There's also an adult legal observer from Glenbrook environs. Then I asked him, what do you want to do when you grow up. Guess. Yup, a lawyer, activist, or a history professor. A professor, I said--so you can teach kids to skip school.

Then they moved east on Adams, I walked away, but ran into them again at a B of A branch on my way to the park to get some fresh air. They blocked the doors of the building, which I thought was wrong, not to mention against the law. So I went over and asked to get in. They said, we're not moving until the police ask us to move. I said, I'm a citizen, you're a citizen, this is private property, you're blocking my choice.

These guys said again they weren't moving until the police told them to.

Think about that. Hiding behind the police while protesting a supposed "police state".

P.S. U stream of the self-described independent left here. To his credit, he came over and interviewed me as I walked away again. And despite the claims the police closed down the branch, the bank had already temporarily closed it. I didn't see the sign because the bullies were blocking the door. A policeman and policewoman came over and asked me if I wanted to get in. I told them it was already closed. Then I walked away. There were lots of photographers and network people, about as many as the protesters.

P.P.S. I also heard much talk of free food as a motivator mid-day. Teamsters truck at the ready in Federal Plaza. 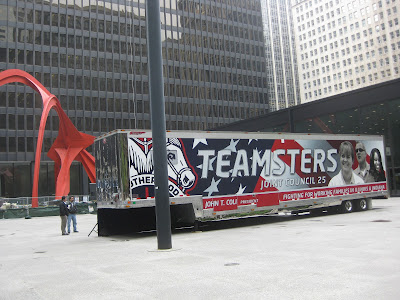 More. So why do I care? Actually, for the next generation, even the perennially silly and arrogant ones.  New Study: High U.S. debt levels could mean a quarter century of weak growth


The notice welcomes students, workers, the documented and the undocumented, and says all of the groups are being oppressed by the rich elite.
“They are detaining us. They are shutting down our clinics. They are closing our Schools. They are taking our wealth. They are busting our unions,” the notice says.

Well, look to the union label. And the pontificating aldermen. The city is BROKE: See Previous post: Obscene Public Pension Bennies Slipped Into Law
Posted by Anne at 5/01/2012 11:20:00 AM

The means and the ends in this case. ;)