Notre Dame off the ObamaCare Reservation 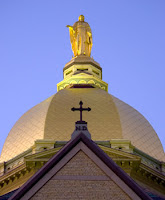 The sometime RINO (religious in name only) Catholic university has joined the 1st amendment cause. Notre Dame sues Obama Administration over HHS rule:

Let me say very clearly what this lawsuit is not about:  it is not about preventing women from having access to contraception, nor even about preventing the Government from providing such services.  Many of our faculty, staff and students -- both Catholic and non-Catholic -- have made conscientious decisions to use contraceptives.  As we assert the right to follow our conscience, we respect their right to follow theirs.  And we believe that, if the Government wishes to provide such services, means are available that do not compel religious organizations to serve as its agents.  We do not seek to impose our religious beliefs on others; we simply ask that the Government not impose its values on the University when those values conflict with our religious teachings. We have engaged in conversations to find a resolution that respects the consciences of all and we will continue to do so.

You know, ND, maybe if your leadership hadn't kissed Obama's ring and dissed those of sincere religious belief, he and his HHS czarina Sebelius wouldn't have been so emboldened on ObamaCare.