These Hands, America. Moms and Dads 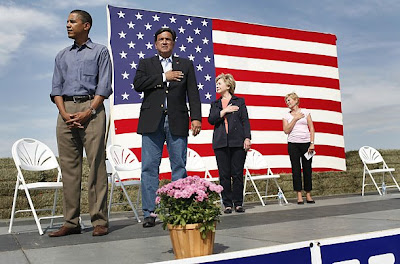 There's that old country song, Daddy's Hands. It doesn't make the beltway buzz these days, but it sticks with me.

John Kass spoke of his dad the other day. Mine is gone now, but there were 7 of us, and after WWII he came back to help out his disabled dad and built on a business that my cousins run today. We didn't always see him much during the week, as he worked more than a few evenings too, but he always come home for dinner--and for lunch with my mom.

There are millions of Americans who work hard and play by the rules, something Barack Obama used to say, just to get elected. Now he sometimes says what he means, and we get it.


You will find that all the arguments in favor of king-craft were of this class; they always bestrode the necks of the people, not that they wanted to do it, but because the people were better off for being ridden.

Homeschooling mom, startup veteran, now career author Penelope Trunk asks in the wake of the Google Yahoo move lauded by the media, "stuck in the 70's": So why do we celebrate women who are aberrations? Yes. Why. When we know, America, don't we, what's really important.

Not everyone one is a fan of apple pie, but we get the idea.

For all its hoopla, the Olympics actually celebrate something Americans too often take for granted, but give a glimmer to millions around the world of individual achievement writ large. Can we still dream, Barack? Is it Ok with you.