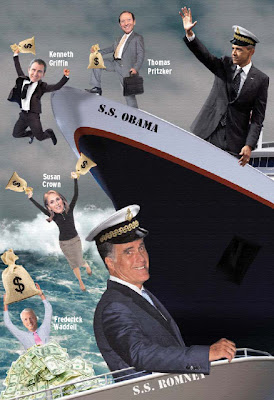 At least 120 significant 2008 hopey changey contributors got real this time from big business to small, including Penny P's brother Thomas. Crain's Chicago Business with the roundup:


For everyone who sent money the first time to Obama and now switched, their sentiment from the get-go was: I really want him to be successful,” says executive recruiter Peter Crist, chairman of Crist Kolder Associates in Hinsdale. “Now they're ready for change.” He and his wife also contributed to the McCain campaign in 2008.

And while the shift won't imperil Obama's electoral vote in blue blue Illinois, this has to be an indicator for independents too, around the state and across the country. Who speaks well of the guy? No prize for guessing:


Clearly, the president still has strong support from many in Illinois. “Obama has done a lot, really—I don't know why people don't see it,” says Vicky Linko, CEO of Funk Linko Inc., a maker of rail-car undercarriages in Chicago Heights that was about to go under in 2009 until it obtained $6 million in stimulus-funded grants.

Gee thanks. Why not sink the country under Captain Ozero instead.