Where to start. I have been blogging all morning and just got to this. Story in Trib on Wilmette about a proposed 50 unit apartment complex that would house low-income disabled people. I have to say, this area is kind of a no-man's land for public transportation or any amenities. The only transport is a bus, otherwise it is pretty isolated from any conveniences. How easy would it be for a disabled person to get around? There are not even sidewalks there, if I recall, nor much room for them, so motorized chairs wouldn't work well. There are also blind curves. And then there's this:

The 3-story apartment building would sit on 3.2 acres of flood plain in far west Wilmette that is zoned for single-family homes. A floodway that diverts excess water to the Skokie River runs through the property, raising concerns that construction would change the water flow and flood neighborhoods. The development would require extensive work and approval through federal and state agencies, according to one consultant.

"Quite honestly, if it was a million-dollar condo I would still be adamantly opposed to it," resident Jae Choi Kim said on Thursday, complaining that Koy presented no detailed flood engineering plan or traffic studies.

"I don't want my basement flooding."

This story features the infamous Housing Opportunity Development Corporation, in it for the up-front fees (to the tune of $840,000 on a recent deal in Evanston) and apparently once again, "apres moi, le deluge", literally and figuratively:

"Good property management is absolutely crucial," said Koenig, whose organization has built and managed other affordable-housing projects, including condominiums in Highland Park.

As readers of this blog may recall, HODC managed the Wilmette Atrium, which has been OVERCOME BY MOLD. Excerpt from earlier post:

(A couple of the board members challenged this speaker, suggesting that we have these deed restrictions in Wilmette, and we have had no problem.) In fact, these restrictions apply to the senior owned housing at the Atrium, where there has been an outbreak of MOLD, and the residents are appealing to the village to fix the place up for at least a million. See MOLD FEST. Solidarity here by the Interfaith Housing Center, whose spokesperson was in favor of the teardown tax, presumably to fund more such success stories.

HODC appealed to the village board for funds to fix the place up, as residents could not afford to do so. More on MOLD FEST and scroll down the Interfaith Housing site. You will note HODC is a member of Interfaith Housing. Looks like on August 8th the village board authorized under the undebated consent agenda a "complete payout" of Village Green Atrium Unit 104, however much that is! How many more units are to come? What next? A little more searching finds this---Sept. 6th request for complete payout of Unit 205, again under the consent agenda. What does this add up to?

And some on the village board have the audacity to ask us for tax increases when it is squandering our hard-earned dollars on feckless profitable non-profits who stick us with the bill for their mismanagement, and paying through the nose for ill-conceived village housing projects of the past.

Apres moi, le deluge. Let's hope this will not be the new motto of the Wilmette Village Board.

UPDATE: Following are pictures of "One Happ Rd" which is currently a patch of green with a woodsy area wedged between the road and some old railroad tracks, with a stream running through it. No sidewalk. It is essentially being used as a park by joggers and the freshman track team from neighboring New Trier West. 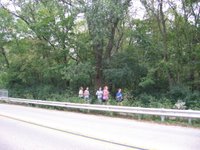 The girls' team was running through the woods there and across the way as I took these pictures. 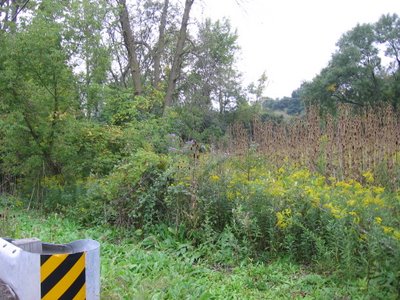 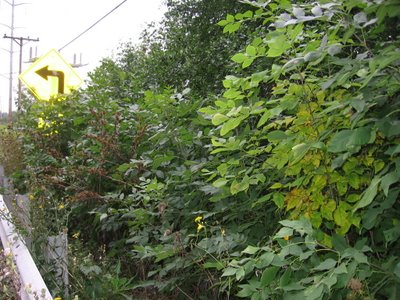 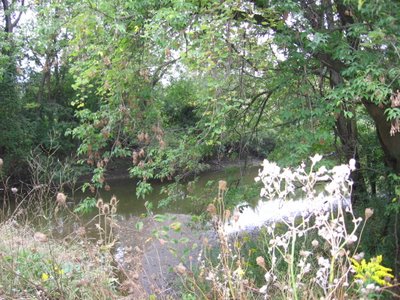 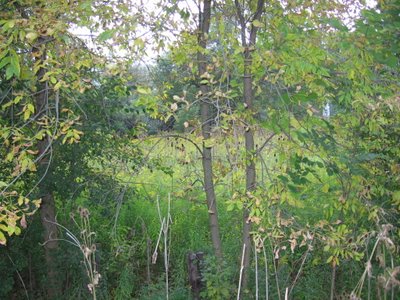