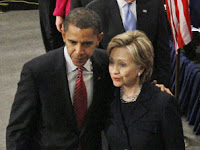 Hillary's confirmation hearing is on this morning. The Campaign Spot asks: What, It's Not Corruption If the Money Goes to the Spouse? The parallel with Blago is obvious, not only with Potty-Mouth Patti, but, as Geraghty points out, with the favor preceding the cash--pay to play bigtime.

It'd be nice to think Mr. Clinton would forswear this money-hustle while his wife is Secretary of State, but that self-sacrifice would belie his entire career. As for Mrs. Clinton, note the scrutiny that Eric Holder, Mr. Obama's Attorney General nominee, is coming under for his role in aiding pardons for 16 unrepentant Puerto Rican terrorists in 1999. But keep in mind the timing of those pardons was intended to help Mrs. Clinton win Puerto Rican support in her 2000 Senate campaign. Someone should ask her at today's hearing about the role she played in that pardon.

And obvious media bias in advance to characterize any pesky questioners. The Politico:

Nonetheless, there are several potential problem children on the GOP side, with noise likely to come from the committee’s most conservative members Jim DeMint (R-S.C), John Barrasso (R-Wyo.) and David Vitter (R-La.).

The double standard is no surprise of course. The only comfort is Hillary is less likely to get out-negotiated as Secretary of State than Obama as President, who's already been rolled by Bill and Hill, and by Blago.

Writer Carol Felsenthal, who interviewed Gov. Blagojevich for Chicago Magazine in 2003, recalls Blago discussing a conversation he had with his mother when he phoned her while riding aboard Air Force One with President Clinton.