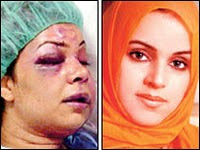 Australia: Members of Hizb ut-Tahrir say country is "god-forsaken," and that Muslims must shun "secular and erroneous concepts such as democracy and freedom"

Meanwhile in America. Shut down for now in Chicago. They're looking for another venue.

...The Islamic Society of North America convention this Independence Day weekend in Chicago. They're apparently not celebrating July 4th. CNN offers spotty coverage. What did Tariq Ramadan talk about? Why was he allowed back in our country? Is he still in favor of the extinction of Israel and only a moratorium on stoning women? Another post features prominent Muslim women, one who founded a group to protect women from domestic abuse. Does any other major religion have such a horrific pattern of abuse and killing of women?

And what about Fatima Mohammadi? Ask a few questions.

In Canada they are having a similar conference. But there they have exercised more common sense on their visa policy.

Where is the local media in Chicago? They think they're being open-minded by virtually ignoring this? You don't even have to look very hard beneath the surface.
Posted by Anne at 7/05/2010 08:08:00 AM

The most efficient way of "shunning" democracy and freedom would be to go back to their caliphates, monarchies, and dictatorships and leave us alone.

We should tell em love it or leave it.