The One as a Woman & Palin as Wonder Woman 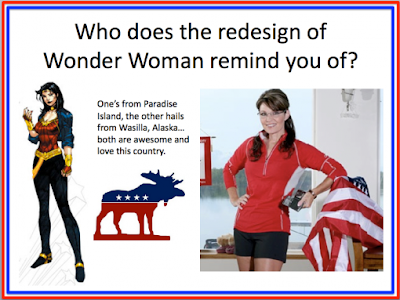 QUESTION: Who does the redesign of Wonder Woman remind you of?

Most in Media Ignore Blago Characterizing Obama: 'More Tony'd Up Than I Am' (As in Tony Rezko, related to that here.) You know, Obama is a lot like Blago--he just campaigns, blames, talks and schemes. He doesn't actually do anything useful. It's all about him.

And lies and lies.

The new costume will almost certainly be better received than the curveball thrown Wonder Woman in 1968, when she lost her powers, dressed mod and practiced martial arts. It took the attention of no less than Gloria Steinem to protest the change, and to help get the Amazon back into her star-spangled duds. Ms. Steinem went on to use Wonder Woman, resplendent in red, white and blue, on the cover of the first issue of Ms. magazine in 1972. A cover line proclaimed, “Wonder Woman for President.

And in case you missed this one on The One:) Rob Long, NRO: Message: I'm Insecure.

Re: Obama: Our first female president.

Any female conducting herself like Obama is displaying the "tropes" of dishonesty and hypocrisy, not femaleness.