Putin on the Ritz 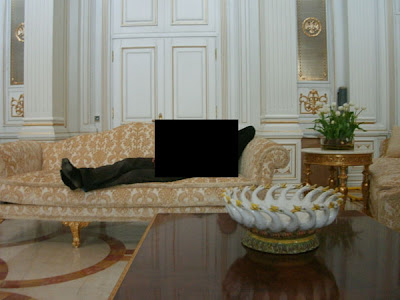 The existence of the "Putin palace" on the Black Sea was discussed by the Washington Post's David Ignatius in an article last year. According to Russian whistleblower Sergey Kolesnikov, the still under-construction digs cost more than $1 billion, include an amphitheater and three helipads and is being "predominantly paid for with money donated by Russian businessmen." Putin's spokesman denied the report, saying that the building has nothing to do with Putin.

Oh my, could creeping commie Russia be a kleptocracy?

When Mikhail Khodorkovsky was found guilty of fraud and tax evasion in 2005, many observers were prepared to believe he was guilty as charged. The injustice was that the punishment was selective. Other Russian tycoons, the infamous “oligarchs”, engaged in similar abuses in the 1990s. Only Mr Khodorkovsky, however, who had committed the cardinal sin of openly defying the then president Vladimir Putin, went to jail.

This time is different. It is hard to see the new charges of which Russia’s former richest man has been convicted – essentially that he stole the entire output of his Yukos oil company over several years – as anything but fanciful. Even former ministers under Mr Putin have suggested they strain credibility. At best, the case seems openly political. At worst, it looks like the latest instalment of a long-running vendetta waged by Mr Putin, now prime minister. 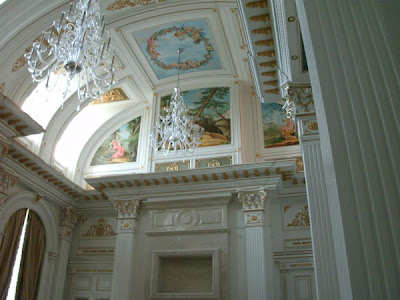 Perhaps the endlessly talented Vlad is dancing on the ceiling. Related post: Russia Jails a Person with an Idea. The show trial of Mikhail Khodorkovsky, China Buys Greece, Russia Warns China in Arctic, Russki News. The Spy Who Left Us. Plus Bad Vlad, Co-Pilot Putin! A Role Model for The One?!!!, Putin KGB/SVR Ham-handed here, Brutal at Home, They Began to Chant, Shouting "Freedom!", Russian Mission, Putin, Bare-Chested Wonder, Vlad the Murderer, Cleansing Anna.
Posted by Anne at 1/21/2011 12:13:00 PM