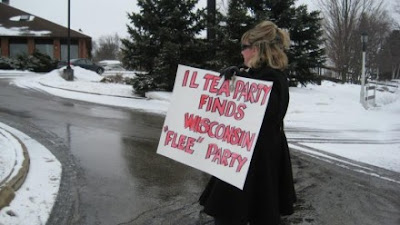 Who were being interviewed by mum MSM, as the hotel called the cops. It's private property but these are elected officials.

Apparently the Northwest Herald is holding the video.

So. The tea party asks a very good question.

Why is the media covering for these "public servants"?

...If these legislators were in Wisconsin they would be arrested by police there for not being on the floor of the Senate. Yet in Illinois, private citizens are arrested at the behest of Wisconsin legislators.