No bombs fell on Detroit 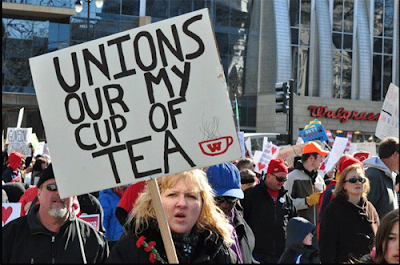 So we have the Chicago Teachers Union busing people up to Madison, while in Detroit they are broke in so many ways. Via Pundit & Pundette, Mark Steyn:

As I said on Rush, unlike European cities, no bombs fell on Detroit. They did this to themselves. And the real rubble is not the ruined buildings, but the ruined people. This is an American city at the dawn of the 21st century, and one in two of its citizens are illiterate. That’s about the same rate as the Ivory Coast, or the Central African Republic, under its aforementioned cannibal emperor. Whereas in the Seventies and Eighties Detroit was ruled by a Democrat mayor, a bureaucracy-for-life, and an ever more featherbedded union army, all of whom cannibalized the city.

Do we want the entire country to look like this? The battle is joined.
P.S. Pix via NiceDeb.
And this one concerns our feckless Gov. Quinn, via Marathon Pundit.

More. Ann Althouse:
I receive a threat: "whoever video taped this has no life and needs to be shot in the head."