WISen Dems on lam in IL forced to buy underwear, scavenge for food 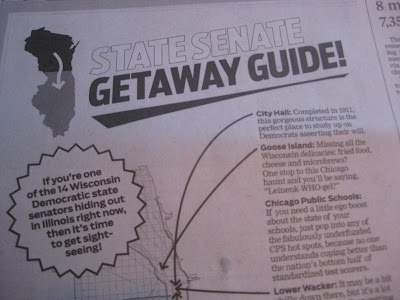 Since they skipped across the state line Thursday to block a Republican budget plan, the 14 Wisconsin Democrats have gone into survival mode in Illinois, doing small loads of laundry and eating "whatever we can get our hands on." Whatever they don't have, they buy — nothing on the state's dime, they insist — or they get from relatives and staff who trek across the border.

"It's just roughing it, like staying in a college dorm all over again," Coggs said. "It's sort of like being a refugee."

A refugee. One blink of an eye away from homelessness. On a "public servant" salary with benefits.

For the first time in history, the average annual compensation for a teacher in the Milwaukee Public School system will exceed $100,000.

That staggering figure was revealed last night at a meeting of the MPS School Board.


PatrickRuffini Patrick Ruffini
In what private sector job are benefits nearly half of salary? This is like moving stuff off books.

Perhaps a little sightseeing will lift their spirits.

City Hall: Completed in 1911, this gorgeous structure is the perfect place to study up on Democrats asserting their will.

And perhaps Mayor Daley will give them the tour he just gave Rahmbo.

Al Capone had a hideout in northern Wisconsin--I suggest these Dems might should check out his old hangouts in Chicago. It seems appropriate. And ejookashunal and all.

...I know you fled your state so you wouldn't have to vote, but since it's election day in Chicago, maybe the Dems here will invite you to vote.

“The graduation rate in Milwaukee public schools is 46 percent. The graduation rate for African-Americans in Milwaukee public schools is 34 percent. I would rather he fired all these Id.iot teachers and hire new non union ones. Anybody involved in a criminal conspiracy is a gangster, this is the most impressive thing any Governor has done in decades!”

Chicago's graduation rate is a bit more than 50%.

P.S. Maybe the Wisconsin GOP left behind to work will pass photo ID at the polls, a measure the Dems hate. Which is why we don't have it in Chicago Way Illinois. The gap widens:

At the heart of all this, Republicans and Democrats are realizing there might be a gap between them that is bigger than they realized. To Republicans, the budget fight has involved the widespread shirking of responsibilities: teachers walking out on students, legislators running away from their offices, even doctors abandoning medical standards to make excuses for perfectly healthy teacher/protesters. To Democrats, the fight has touched a core issue; anything is justified to preserve union benefits.

Illinois held hostage. I'm rooting for Wisconsin. So should we all.