Illinois Pays the Price of Taxing the Rich 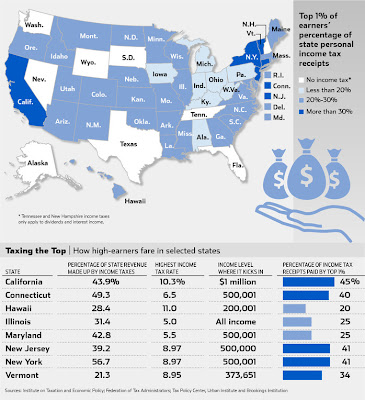 New York, New Jersey, Connecticut and Illinois—states that are the most heavily reliant on the taxes of the wealthy—are now among those with the biggest budget holes. A large population of rich residents was a blessing during the boom, showering states with billions in tax revenue. But it became a curse as their incomes collapsed with financial markets.

Arriving at a time of greatly increased public spending, this reversal highlights the dependence of the states on the outsize incomes of the wealthy. The result for state finances and budgets has been extreme volatility.

Illinois: Almost 97% of state workers could be represented by unions soon
Union members the new rich in this job hemorrhaging, bankrupt state. Good luck retiring, Porky Pigs. Unlike the private sector, you don't create wealth. You are a burden on the taxpayers.

More. Newsalert: Chicago's Population Decline: The Shocking Facts
What will change this culture of death? Let these children go.

Related posts here and here. Let's note Chicago and Cook County are dominated by government jobs. Gov. Quinn found his margin of victory in counties clustered around the city. And this trend:

...Some glimmer of recognition from the new regime, but not our feckless Dem governor.
P.S. Here's the Fed number of 75,000 from 2002, which included part-time and the collar counties. That's a big difference from the full-time of 49,000 plus in Chicago stated above.
1. Figures reflect the number of full-time, full-time equivalent and part-time employees in the six-county area: Cook, DuPage, Will, Lake, McHenry and Kane counties.
Wonder what the number, including part-time is today?
Posted by Anne at 3/29/2011 09:14:00 AM