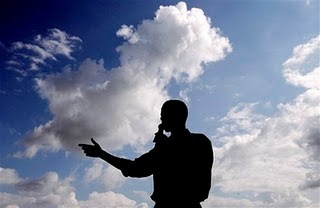 Come on Barack. A pathetic pretense of caring.
He's lecturing about history.
You know, Mr. President. You will either be a footnote or go down as one of the worst presidents this country has ever suffered.
Obama as Hamlet.
Obama: Being president of China would be easier
Then you could just use tanks on your own people, no alert system operable.
...I'm reminded of 2007, when he was campaigning. It was all there (since then I remembered how to spell judgment):

On the Daily Show last night, Obama claimed he doesn't need experience to be President, just good judgement. (The Swamp has the clip.)

Did he use good judgement when he threatened to unilaterally invade an ally? Commander Obama.

Did he use good judgement when asked what he would do if two US cities had just suffered a terrorist nuclear attack? He talked about Katrina, "The first thing we'd have to do is make sure we've got an effective emergency reponse." Mayor Barack.

Do we want a president who is cozy and bankrolled by a slightly unhinged anti-Semite like George Soros? Are we comfortable with a president who chooses a church by its leader who thinks black separatism is OK and Ghadaffi, who blew up an American jetliner, is a good guy? Apologist Barack.

...I give credit to the president for staying the course in Afghanistan, with General Petraeus. But that's only because he was boxed in during the campaign by calling it the good war, hoping he would never have to do anything about it again. And no one in the world should expect any substantive help on anything from this president--despite his posturing during the campaign at the Brandenburg Gate.