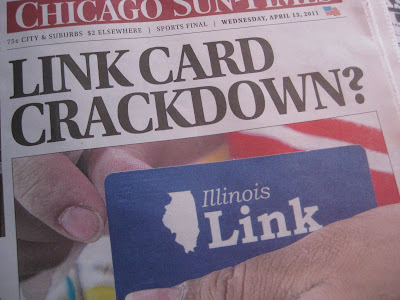 The "system" seems to be working fine. I spent 5 minutes while an able bodied man in front of me in line at a loop 7-11 tried to buy fiji water and arizona iced tea. There goes my bus home from WORK. Who's the slave now?

Government Assistance should be temporary for all except children, seniors and those who qualify as Mentally or Physically Disabled.

Stores purposely use outdated Point of Sale systems to charge Alcohol & Cigarettes. The worst will make fake charges offering Cash in return for a Fee.

Entire Link Card Balances are spent on candy, energy drinks, & other items to be later resold.

This Billion Dollar Con Game is sapping the life out of our society. Limiting the Link Card to Food Staples would be another small step to en;courage self reliance.

Whats the problem with putting a picture on the link card, since some poor people don't have an I.D. card. a picture on there link card would be a free piece of ID, and maybe it would stop the fraud.Because we all know that there is fraud when it comes to them link cards.

Why should I have to show ID's when I use my credit card at the store and the person in front of me who just used 2 link card to purchase food doesn't??

I agree 100% with most of these comments. If you want to continue your impression, please "LIKE" the Reform Illinois LINK on facebook. You can find it here:
http://www.facebook.com/pages/Reform-Illinois-LINK/158865824198318