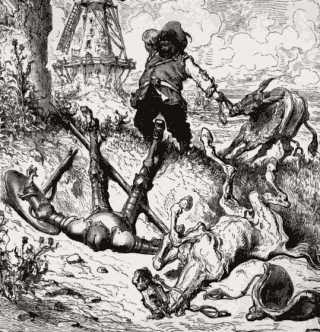 Roma on WLS Chicago radio just brought out the Don Quixote comparison, which, along with his gas pump gaffe invites ridicule...but not from the MSM, who are already carrying his water for reelection. And then we had last night. The president comes out (after spending the day campaigning with Al Sharpton), commands the cameras, says nothing (no deal reached on the budget the Dems didn't pass last year), and accuses, the TEA Party, presumably, of grandstanding.

Oh, and he says while others will work through the night, he'll "check in" in the morning.
...Mark Steyn is on now with Don and Roma--Obama thinks his speechifying can power the windmills...Obama flew into Washington today on a 3 day ceremonial visit to the US.
P.S. Obama makes fun of someone worried about gas prices, suggests they trade in for a Volt or something. (AP buries the report, scroll down the Instapundit link) Do they work well even in Chicago, not to mention further north? Then there are the windmills in the winter. Did you hear about the big freeze in Scotland and their loss of power? Probably not through your MSM, no, no, no. Here's a follow up report from the Brits. HT Memeorandum.
...And he's still repeating that 2% of the world's oil canard. I also note the Tribune story on the event, buried in the business section, doesn't mention the company is Spanish-owned. Nice quote at the end:

As Obama tries to soothe the motoring public, though, he risks disappointing his base. Some young voters attracted to his promises during the 2008 campaign are displeased with an Obama energy policy that still sees a place for oil, clean coal and nuclear power.
Many former Obama campaign volunteers are attending a conference in Washington next week where they will use organizing techniques learned in the 2008 campaign to press for clean energy.

"We really want Obama to be our hero, still. But we don't vote for a campaign. We voted for change, and he's giving us the same D.C. politics as usual," said Maura Cowley, co-director of the Energy Action Coalition and a former Obama campaign volunteer.