The GOP Path to Prosperity. Rep. Paul Ryan (R-WI) We've to got fix this, America: 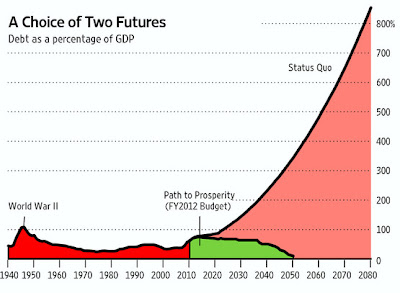 The president's recent budget proposal would accelerate America's descent into a debt crisis. It doubles debt held by the public by the end of his first term and triples it by 2021. It imposes $1.5 trillion in new taxes, with spending that never falls below 23% of the economy. His budget permanently enlarges the size of government. It offers no reforms to save government health and retirement programs, and no leadership.

Our budget, which we call The Path to Prosperity, is very different. For starters, it cuts $6.2 trillion in spending from the president's budget over the next 10 years, reduces the debt as a percentage of the economy, and puts the nation on a path to actually pay off our national debt. Our proposal brings federal spending to below 20% of gross domestic product (GDP), consistent with the postwar average, and reduces deficits by $4.4 trillion.

A study just released by the Heritage Center for Data Analysis projects that The Path to Prosperity will help create nearly one million new private-sector jobs next year, bring the unemployment rate down to 4% by 2015, and result in 2.5 million additional private-sector jobs in the last year of the decade.

This is not just a budget, it's a cause.
Just saw him on CNBC...video here
...Either we tackle these problems or they tackle us
:)
More. Heritage Morning Bell with more detail: Chairman Ryan's Budget Resolution Changes America's Course
Posted by Anne at 4/05/2011 07:07:00 AM