Keep the Bad Guys at Gitmo, Toss the Foolish Whiners Out of the White House 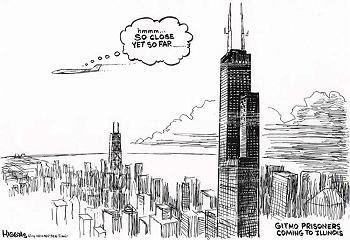 Have we ever had a more pathetic excuse of an Attorney General than Eric Effing Holder. He and his boss repeatedly bad-mouthed the Bush administration on Gitmo, now reluctantly acknowledge the wisdom of their approach. You know, keep terrorists incarcerated, their trials away from populated areas, and don't grant them full American civil liberties. As the Journal points out, Democrats led the opposition to a trial in NYC, though I can't give duplicitous Dem Sen. Durbin here the same credit on questioning the sense of Thomson, Il as Gitmo North. That goes to many of us in Illinois, including then Rep., now Sen. Mark Kirk (R-IL), and other Illinois Republicans. (By the way, Sen. Kirk is profiled in Roll Call here.)
Morning Joe, in a rare burst of candor, rakes them over the coals. Via Newsbusters: We made a concerted effort to expose the Dems' sleight of hand on this issue and succeeded in pushing them back to a common sense stance.
Now we need to hold this administration accountable for its series of misjudgments this country can ill afford.
More. Rich Lowry. Andrew McCarthy:

No one should be under the misimpression that today’s decision was made by the Justice Department, even if it is being announced by Attorney General Holder. From the start, the attorney general has been implementing President Obama’s policy — it was the president who, as a candidate, campaigned on returning the country to the pre-9/11 counterterrorism model that regarded al-Qaeda’s onslaught as a mere law enforcement problem.

Statement by Illinois Lawmakers on Administration’s Shift on Thomson Prison

We appreciate the Administration’s reversal of position in agreeing not to transfer any Gitmo detainees to Thomson and look forward to working with them to complete the sale of Thomson to the Bureau of Prisons for use only as a federal prison. We will remain vigilant to ensure Congress stands with the American people and extends the current prohibition on transferring any Gitmo detainees to the United States.

Related posts: What next--take a terrorist to lunch day, Well, maybe Dems will finally attack them as "the rich", Another Big Yawn from Dick Durbin: What Nukes?, Dead Wrong Durbin, Haven't you heard?,Ben Stein at Camp Pendleton, Collateral Damage in the Making, Your Morning Thomson, Chicago Style, Never Again, Gallup Polls on Thomson, Terrorists as Tourists?, LA Reaching Out: Nukes the New Normal, Color the Trib PC Pink, Palin on Thomson, Ahhnold, Roskam, Kirk Statement on Thomson, How Will Importing Dangerous Terrorists Make America Safer?, It's like bulldozers in the night, They did it even before the hearing, Criminally Irresponsible Dems. Quinn. Durbin,Thomson Hearing 12/22, Protest, PC Trib tries to whip us in line,Thomson Illusion, Bringing Terror Home, Cynical and Cowardly,Change of Venue for KSM?
Posted by Anne at 4/05/2011 12:37:00 PM