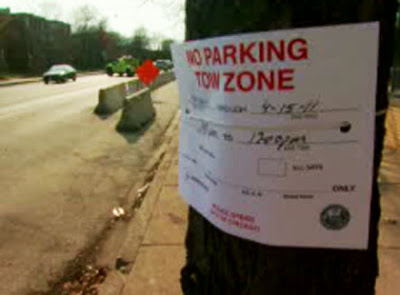 Obama spoke for about 20 minutes. He started off by talking about some of the people he knew in the room, singling out Emanuel for special treatment.
“Yes, he is foul-mouthed, yes that finger thing is a little creepy, but I love him anyway," he said of his ex-chief of staff.

He noted there were people in the room from all periods of his Chicago life, saying, "As I look across the room, it’s a record of my adult life."

More than a little creepy. How about that rogue's gallery in the neighborhood polling place on election day 2008.
More.

Taking aim at Republicans over the budget, he said that under the infrastructure cuts they proposed, U.S. airports would become substandard, and "under their vision ... we would be a nation of potholes."

How bout that Sec. Pothole. Because we're doing so well now.
Potholes? What. Didn't the billions in stimulus shovel them all full of new fill? Gee, where did it all go?
As for the neighborhood. Peonage. Obama Neighborhood On Lockdown:

“I had to walk three blocks out of my way just to get one place but it’s also cool when his motorcade goes past, so it’s kinda worth it,” another neighbor, James Coates, said.

The president’s barber doesn’t feel cut off by the visit, either. Zariff has Mr. Obama’s honorary chair and photos on display and supports his impending run in 2012.

“We’re very excited about it. Definitely another four years for him,” he said.

“Oh yeah. Yes ma’am. Give him a chance,” one customer said.

Other headers: National ‘Gas-Out’ Day Could Be A Hoax