Saudi woman to be lashed for driving car 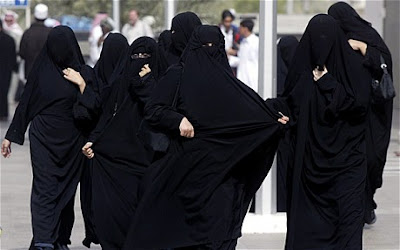 So the King got some good PR for supposedly allowing women to vote--even though it's off in the future, now the lash comes down:


Najla Hariri, one of the women facing charges, told Reuters: "They called me in for questioning on a charge of challenging the monarch on Sunday... I signed a pledge not to drive again, although my driving was a result of necessity not an act of defiance."
Under Saudi Arabia's strict Islamic laws, women require a male guardian's permission to work, travel abroad or undergo certain types of surgery.
There is no law banning women from driving, but there is a law requiring citizens to use locally issued licences while in the country. Such licences are not issued to women, making it effectively illegal for them to drive.

How convenient. And then there's the matter of "challenging the monarch". 10 lashes.

Such a modern, forward looking country. (sarcasm) Why are we allies with them again? Oh, they have oil. We need to develop energy independence so we do not have to put up their crap any longer.

Yeah. Crap is right. Clearly they know how to manipulate our media as well.

Which is not hard