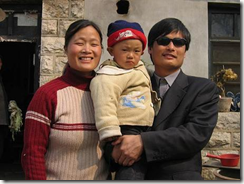 In China. Talking about the one-child policy is taboo--and they beat him and his wife in front of their only child.

And this--Father Robert Sirico in the WSJ:


On Monday, the Vatican released an 18-page document titled "Toward Reforming the International Financial and Monetary Systems in the Context of a Global Public Authority." Since then, it has been celebrated by advocates of bigger government the world over.

Is big government inherently corrupt, turning a blind eye to evil consequences? I'd say yes. In this country we don't beat people for protecting innocent life--yet. We just kill innocent life. And sometimes the mother dies too.

More. “Triplets are dangerous. And you know, if they all survive to term, it takes parents more than 24 hours a day to care properly for three infants.”

On the Road to Serfdom: CNN Suggests Obama Should Bypass Congress on Economy, Rule by Executive Fiat