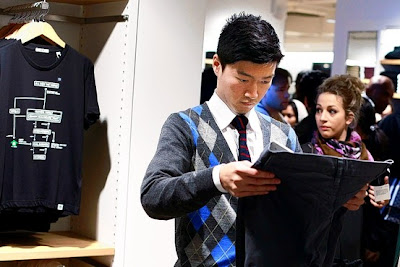 Sales outstrip women, shall we say. I like this trend, a bright spot in the economy, even among the youth. There's hope for the non-OWS look:


"Guys are trying to do whatever they can to raise the job opportunity," NPD's Mr. Cohen says. "Both young and experienced men are looking at dressing as a way to separate themselves from others."
Retailers and analysts also say they have seen a broader cultural shift among younger men, who are interested in dressing up more.
"There's a whole new intrigue with young men in particular interested in sartorial dressing," Mr. Jennings says. "I even see my nephew in elementary school asking me, 'How do I fold this pocket square?"'

They don't want to look like their too laid-back parents.

I want hats to make a comeback. Come on, guys:)