The troll lurking under the bridge 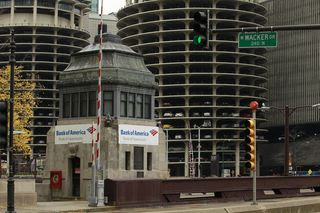 At least one Chicago bridge under Rahmbo's stewardship is festooned with ads--from Bank of America, presumably strong-armed by Rahm and Dick Durbin to pay up or get pilloried again. It's the Chicago Way.

This bridge has attracted the attention of the esteemed Chicago Tribune architecture columnist, who rails at the blasphemy on the bulwark:


The seven, banner-like signs — four on the south bridge house, three on its northern counterpart — don’t blend in. Instead, their white backdrop offers a grating contrast to the subtle, refined elegance of the limestone-faced towers. The blue letters and the American flag-like B of A logo only add to the visual cacophony.


Despite the outrage over the Wabash Bridge signs, Chicago will keep pushing to sell ads to fund critical services like filling potholes, Kathleen Strand, a city spokeswoman, said Wednesday.

She also answered the lingering question of how much Bank of America paid to have its ads on the Wabash Bridge.

"As you know, this was a temporary first-time initiative that Bank of America agreed to partner with the city on," Strand said. "The revenue from it is really minimal because the focus was primarily on regenerating interest from the business community."

I would have thought that the privilege of despoiling Chicago's architectural heritage would be worth a little more than that.

Well I have a suggestion. How 'bout corral your artsy-fartsy friends to contribute to keep ads OFF the bridge--this is what philanthropy looks like. You know, your own $$$. Not other people's, like say, the taxpayers.

And where is the taxpayer money going? Down the maw of the public union trolls.

So you could seek the support of SEIU. Ask AFSCME. Cue the CTU.