A Chicago Kingpin Falls on Pay to Play 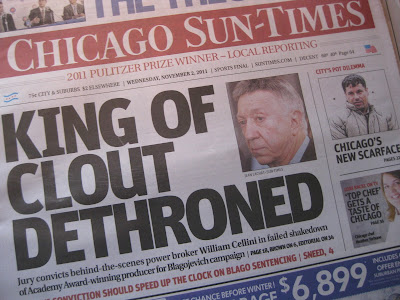 Just the other day we had an ObamaRezko story. Now Rezko figures in this one:

After rendering their verdict, about half a dozen jurors assembled at the downtown bar Elephant & Castle to toast the conclusion of the case. Several said that tapes, documents and testimony all factored into their decision.
Cellini was accused of trying to shake down investment firm owner Thomas Rosenberg, the producer of the Oscar-winning movie “Million Dollar Baby,” for a campaign contribution to then-Gov. Rod Blagojevich. In exchange, “a brick” would be lifted from Rosenberg’s stalled pension business before the Teachers’ Retirement System board.
Cellini’s defense insisted it was serial con man, drug abuser and pension board member Stuart Levine who concocted the extortion scheme with Blagojevich fund-raisers Tony Rezko and Chris Kelly, then duped Cellini into delivering a message to his longtime friend Rosenberg.


Jurors didn’t buy it though.
“I really believe he extorted,” juror Paulette Green of Round Lake Park said of Cellini. “I don’t think he went in it wanting to. I believe it just happened.”

Serendipity for sure. Tribune with U.S. Atty Patrick Fitzgerald's remarks. John Kass: The guy who couldn't be touched is, finally