FLOTUS: Barack the Lightworker or something


“The first lady is able to play a unique role as an ambassador for the president,” said campaign manager Jim Messina in a statement to The Hill. “She was an enormous asset to the president traveling the country in 2008, and we expect that she’ll play just as critical a role in 2012.”

The campaign also recognizes that the first lady is a fundraising dynamo. According to a campaign official, she has four fundraisers this week alone, including an exclusive lunch where tickets start at $20,000 per plate.

Yeah, it's tough to keep her down on the farm after she's actually seen Paris. And London. And the Vineyard. And the Vineyard again. Colorado slopes. Vegas, though not the same time as the GSA. I mean, everyone else in the administration/permanent campaign seems to be living high on the hog. So she's still an enormous asset.

Maybe Michelle's feeling biblical about those sun-splashed days in South Africa or Marbella--Michelle Obama: 'This President Has Brought Us Out of the Dark and Into the Light'--let's cut her some slack on the campaign trail, but even Barack know he owes her for going to Venezuela without her.

So, FLOTUS, you heading over to Wisconsin, another swing state?

Because Americans really care about what's happening on the jobs front in this country, since we got Obamanomics graphs that look like an upside-down rainbow. 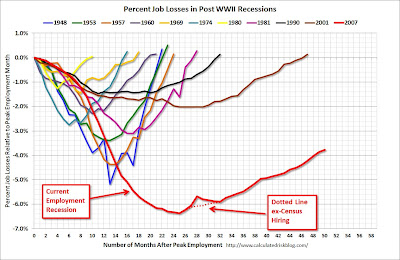 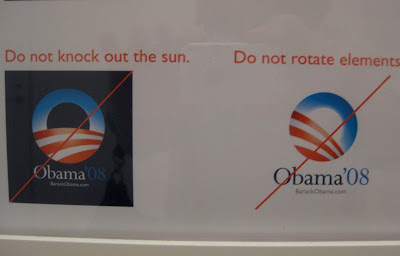 I took this photo at the Art Institute of Chicago at a contemporary exhibit featuring the creation of the famous 2008 logo, with bonus-- Techniques to Avoid. It sits across Millennium Park from the O campaign. 2012.
Posted by Anne at 4/17/2012 08:57:00 PM