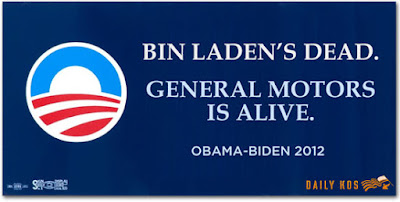 From Hope and Change to this. The Barackstar rolled out the first half with Oh that Joe Biden, arguably the most bumbling, blowhard Veep in American history. And even the NY Times is a bit appalled at Obama spiking the ball on Osama.

Now we get the other half, the big effing deal for Government Motors. Does this really score as a winner for the Obama record? Free Beacon:


Recent polling from Rasmussen indicates that 59 percent view the bailouts as a “failure” and only 44 percent think the bailouts were “good for America.”
The administration has already written off $7 billion in taxpayer losses in the American takeover of Chrysler and General Motors; those losses are expected to climb as high as $23 billion—27 percent of the $85 billion spent on the bailout.
While the bailout is widely credited with saving the two companies, increasing taxpayer losses have made it nearly as unpopular in 2012 as it was when Obama was elected. More than half of Americans still disapprove of the auto bailout compared with 61 percent in 2008.

Obama's favorite unions jumped to the front of the line, shoving aside private property rights (and the investments of retired state police and Indiana teachers). We thought of the last Big Gov Dem president, Bill Clinton, as an I feel your pain phony photo-op, but Barack has gone one more.

It's the permanent campaign, he's invited celebs in and turned the actual War Room over to the PC media.  The bumper sticker is all there is.

P.S. Guess this is why he's doing bumper stickers--after that key demographic:


Young people are notoriously transient, and it’s hard for political organizers to track them down — harder perhaps this year, with many recent college graduates unable to find jobs and a rising percentage of young people moving in with their parents.