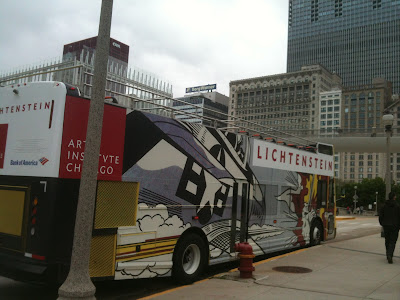 It's Lichtenstein coming up at the Art Institute!

Felony Franks gets some Fed on the menu, courtesy of John Kass, the Trib's stellar columnist.

890 AM, my favorite radio station, is celebrating their 89th year. 1924, quite a run. Check out their NATO song. And roll back NOW and the Axelrod Astroturf, join the El Rushbo babes if you're so inclined:) I have:)

Some measure of political courage from my former habitat's Village President, Wilmette's Chris Canning, standing with Rahmbo for pension reform:


Canning said residents in Wilmette quadrupled their contributions to police and fire pensions between 2000 and 2010, but saw the level of funding in the plan go down from over 94 percent to around 70 percent.

My women's harmony group and I are in the midst of our spring season, singing at a home for the blind today, I've never known a more appreciative group. So we'll belt out St. Louis Blues and sing Sinatra's Chicago. Cheers.
Posted by Anne at 5/11/2012 06:26:00 AM