Is religion on trial or mass murder? 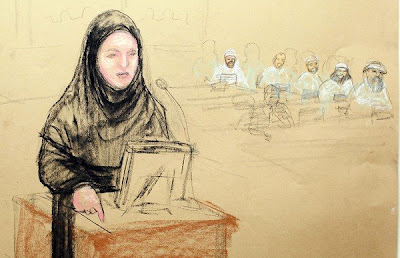 Remember, she's defending a 9/11 terrorist who murdered thousands of Americans.

Chicago lawyer wears Muslim garb while defending Gitmo 5 client 'I never thought in my wildest dreams that this would become an issue,' says attorney of decision to respect defendant's religious wishes


For her, the issue is a simple one of respecting the religious and cultural beliefs of a client. She said that since she was appointed to bin Attash's case last year, she has always dressed conservatively out of deference to a client who believes he will violate a religious tenet if he looks at a woman who is immodestly dressed.

She went on to publicly lecture others to cover up. Is this what American feminism has come to? A sensible response:


Amina Saeed, president of the Muslim Bar Association of Chicago, said she could appreciate Bormann's decision if it were part of an effort to respect the wishes of a client or to connect with him, calling it "thinking out of the box" and reflecting a large measure of understanding and religious tolerance.
Saeed said she would never expect an attorney to do that in response to a demand from any client, however.
"He should respect her for who she is and the services she provides. It has absolutely nothing to do with what she wears on her head and on her body," Saeed said. "I would never expect anyone to conform themselves like that in public to my beliefs."

I liked one suggestion--blind the defendants.

P.S. WSJ Editors: The KSM trial spectacle. At some point, the prosecution has to start treating this like the Nuremberg tribunal—as an opportunity to re-educate the world about what the terrorists did and why they are on trial.
Posted by Anne at 5/08/2012 09:40:00 AM