We know Michelle O has achieved quite a bit in her life--her Princeton, Harvard ride, stint at the Daley Machine HQ, and cushy spots on various boards, etcetera, etcetera. She's planted a White House garden, and has Barack Obama.

What more could there be.

She wants to be Beyonce. Maybe that explains this, at a kids' award show. 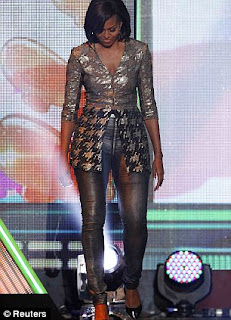 Some dared to ask the question at the time:


Has Mrs. Obama broken the rules for what is age appropriate? Should she keep pushing the fashion envelope, or are you so over it?

In any event, she's getting more scrutiny from her fellow travelers, if not on her policy forays and crony cash-ins, but her starstruck gush: Keli Goff: Did Michelle Obama Make a Major Misstep with Beyonce?


In an interview with People magazine to promote her new gardening book, when asked if she could be anyone in the world, the first lady replied "Beyonce."
While I thought it was a slightly odd response, (after all, I couldn't picture Hillary Clinton saying, "Lady Gaga" or "Madonna") I assumed that maybe I was simply being too square. I then shared the article featuring her response with a family member and African-American friend, both of whom are fans of the first lady, and another friend who is not African-American but is a die-hard Beyonce fan. Without sharing my own thoughts first, I asked for theirs. They all reacted with varying degrees of horror.

They were not alone. A quick look at the comments on predominantly African-American news sites, where commenters tend to be fans of the first lady, Beyonce, or both, made it clear that many found the first lady's response troubling, and some found it downright embarrassing. A quick sample of the comments:
"This makes me sick to my stomach if Mrs.O said this."
"Embarrassing..."
"I just think that she should have found some other Black woman to praise other than Bey because she is not a good role model."
"And we wonder why our kids are struggling in the streets and schools. All I can do is shake my head on this one - unbelievable."

I've commented on Beyonce before. And let's recall the glorification of cop-killing and misogyny in the White House, at a workshop for kids. The Huffpo blogger goes on to flesh out her own opinion, which is worth the read.

So we may come together on this, conservatives and somewhat independents alike--our too Hollywood, too party-time presidential couple may get a reckoning in the fall. We are in the recovery that wasn't. We could use better leadership.

P.S. Here's someone who takes her obligation as a role model seriously:
More. Anne Leary ‏@backyardconserv