Barack wants to be the bride at every wedding with campaign gifts galore, now trolling for votes gets between a thirsty crowd and their beer. Even in Iowa that's a risky move.

What does our hero do?:


The crowd that was "screened and scanned by the Secret Service and penned in by yellow caution tape" must have taken it for granted that Obama would be just as generous with his own money as he is with everyone else's, because they started chanting "Four more beers...four more beers!" Obama, paving the way for a "new America where prosperity is shared," calmed the rowdy crowd, saying "Let me see what's in my wallet."

Imagine that! America's "Ground Force One" bus-tour President, a man who couldn't care less if Americans are strapped for cash when they're forced to pick up his tab, had to check the status of his wallet contents.

As the thirsty crowd continued to cheer "Four more beers!" the President yielded and in a fair-minded and nondiscriminatory manner said, "I'll tell you what, except for [the guy with the] Romney sign, I'll buy beers for ten people."

No multiplying loaves and fishes, hmm, mmm, mmm? No generosity of heart for all his fellow Americans? No beer summit for you.

No understanding that he's costing this small business owner upwards of $25,000 in beer sales before a rock concert?

Those twinkies cost more and gas prices are heading higher.

But no worries, Barack's got his precious boutique Honey Blonde ale in the plush surroundings of the Vader Bus.

P.S. Who will Barry and Me-chelle target next. 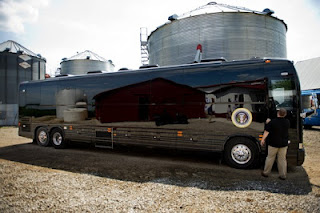 Does this bus make my but look big.


Chicago gas prices are among the highest in the country, jumping to nearly $4.20 a gallon on Monday, according to petroleum analysts. Average gas prices in the U.S. have increased 18 cents over the past two weeks.