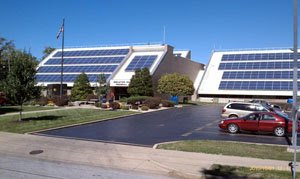 Oh, and it went to the party-time GSA for review:

The building project also is profiled on the GSA’s website, though no mention is made of the origin of solar panels.

The memo highlighting the expenditures from the inspector general was sent to two GSA officials. The first was Robert Peck, the former Public Buildings Service commissioner who was one of several executives ousted earlier this year when details surfaced about the GSA’s lavish Las Vegas conference in 2010.

What would Paul Simon say.

I guess Rahm and Barry have another excuse for Solyndra failure. They may not want to use that one either. Dem moral high ground is very shaky these days.

In other news, my friend Mary wrote in:


For once Mr. Romney appears "real."   Everyone understands that if you don't pay federal taxes, you get all the benefits but none of the costs.  Of course you would want this system to continue!   The press pretends that this election is about intellectual differences.  Wrong!!   Its about getting something for nothing.   Well, almost nothing.   Obama's dependents still have to vote, or have someone do it for them, on election day.

The Obama plague. But party on, Dems, it's other people's money.

We can do better:


Ryan, staking out his own turf, emphasized the record-breaking national debt and and unloaded on the Obama administration.
"President Obama, when he was running for president, said that a $10.6 trillion debt was unpatriotic," Ryan said during a rally in Des Moines. "It’s a $16 trillion debt now, I wonder what he would call that."
Ryan said the share of national debt held by each American has shot up dramatically since the day of Obama's presidential inauguration, skyrocketing from from $35,000 a person to $51,000 a person.
"We can't keep doing this, and if we don’t get ahead of this problem, if we don’t tackle these problems, they will tackle us," Ryan said.

I'd say those Chinese solar panels on the fiddlin' Dem roof were unpatriotic. Anything to say, Sen. Durbin. Barack-O.

Previous Preezie post:  Valerie Jarrett had more security on her vacation in Martha's Vineyard, than Ambassador Chris Stevens had on 9/11 in Benghazi.

Finding the best area to install your solar panels is one thing, but you also need to ensure that the area chosen is large enough to accommodate your energy generation needs.

For your free solar quotes today you can now being with us with using http://www.solarquotesfree.com.au/

We've been using chinese subsidies for quite some time now, no surprise.